A Nation at Risk

According to the National Commission on Excellence in Education, America is “a nation at risk.” This 1980s report stated, “If an unfriendly foreign power had attempted to impose on America the mediocre educational performance that exists today, we might well have viewed it as an act of war.”1 The consequences of this poor performance are not only declining knowledge but also declining morality, both of which are necessary for a free and prosperous nation. The mediocrity is primarily due to a state-monopolized educational system that has rejected its Christian foundation, replacing it with a secular ideology that teaches man is the ultimate authority and source of truth.

Contrary to the belief of many educrats, the underlying problem is not financial but ideological. We have replaced a Christian philosophy with a secular philosophy of education. The Apostle Paul warns us, “See to it that no one takes you captive through philosophy and empty deception, according to the tradition of men, according to the elementary principles of the world, rather than according to Christ” (Col. 2:8).

A man-centered worldly philosophy brings captivity, while a Christian philosophy liberates. America became the most free and prosperous nation the world has known due to its Christian education, which passed on principles of truth, liberty, and creativity for centuries. Over time this Christian education was supplanted by secularism. The content of school textbooks reflects this change. 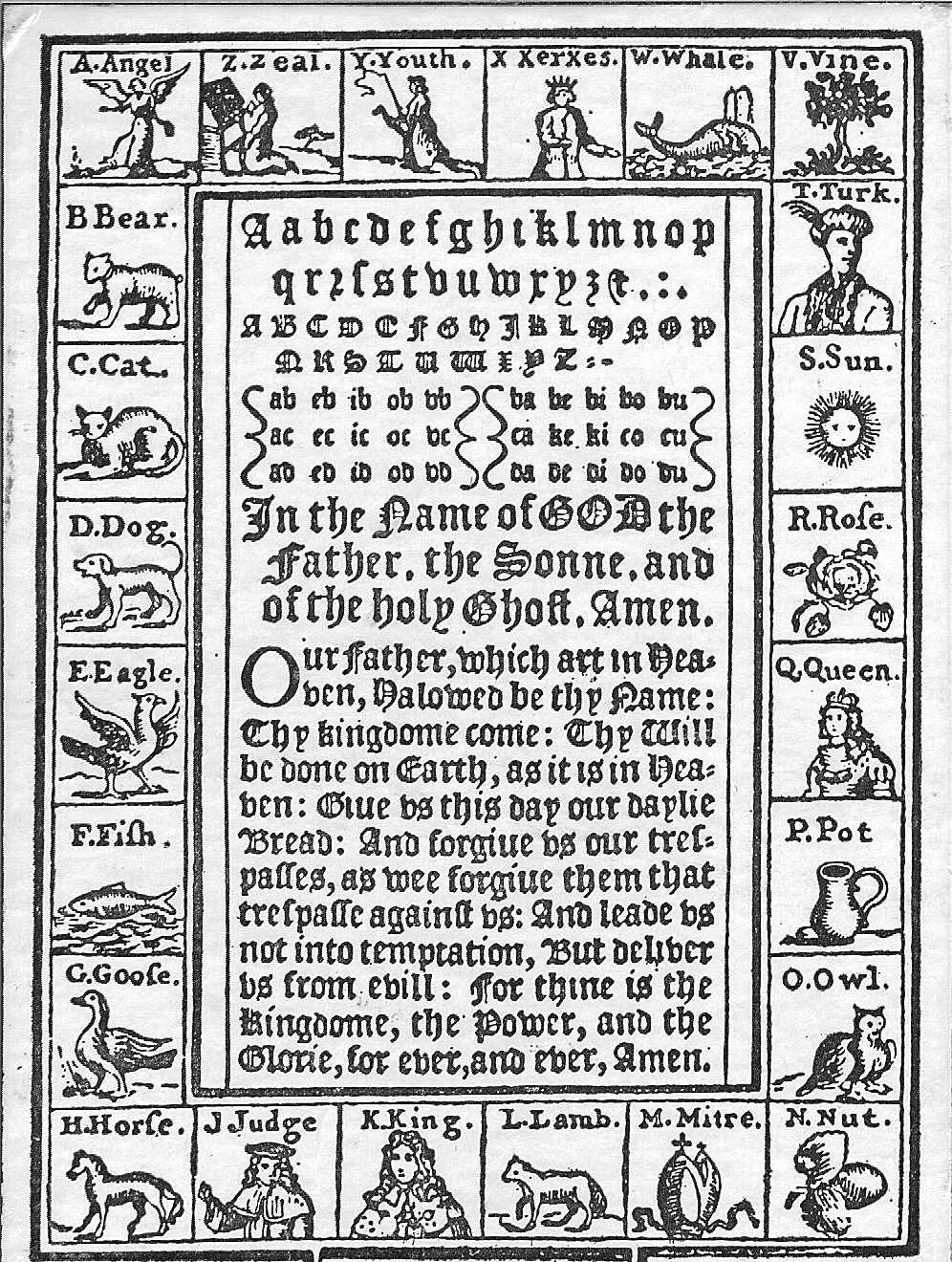 The Bible was the central text for early American education. Theological catechisms were very popular with over 500 different ones used in Colonial times. John Locke observed in 1690 that children learned to read by following “the ordinary road of Hornbook, Primer, Psalter, Testament, and Bible.”2 Hornbooks were the most widely used tool for teaching reading in seventeenth-century America. A hornbook was a flat piece of wood with a handle, to which a sheet of printed paper was attached and covered with a transparent animal horn to protect it. A typical hornbook had the alphabet, the vowels, a list of syllables, the invocation of the Trinity, and the Lord’s Prayer. Some had a pictured alphabet.

A Colonial Hornbook. The Lord's Prayer was the first reading lesson.

The first reading primer designed for the American colonies was the New England Primer. First published in Boston around 1690, it was the most prominent schoolbook for about one hundred years, selling over five million copies. It taught the alphabet with a rhyme, such as this example from a 1777 Primer:

A In Adam’s Fall

B Heaven to find

Noah Webster’s “Blue Backed Speller” would become the most influential textbook of the era after its publication in 1783. Selling over 100 million copies during the next century, its premise was that “God’s word, contained in the Bible, has furnished all necessary rules to direct our conduct.” It included a moral catechism, large portions of the Sermon on the Mount, a paraphrase of the Genesis account of creation, and numerous moral stories. Students would read such things as the following:

First published in 1836, The McGuffey Readers shaped national morals and thinking more than any other books besides the Bible. Written by minister and professor William Holmes McGuffey, they sold over 122 million copies in 75 years and are still used today in some private schools. McGuffey wrote in the Preface to the Fourth Reader: “From no source has the author drawn more copiously, in his selections, than from the sacred Scriptures. For this, he certainly apprehends no censure. In a Christian country, that man is to be pitied, who at this day, can honestly object to imbuing the minds of youth with the language and spirit of the Word of God.”5 Other prominent textbooks from early America were thoroughly Christian as well.

New England Primer. This edition of the Primer differed somewhat from the 1777 version but still used biblical imagery.

The contrast of biblical education in early America with today’s secular education is evident when comparing the definition of words from Webster’s original Dictionary, published in 1828, with modern dictionaries. Webster used thousands of Scripture references and defined words biblically. Modern dictionaries give humanistic definitions. Consider, for example, the word immoral. In his original definition of this word Webster wrote, “Every action is immoral which contravenes any divine precept, or which is contrary to the duties men owe to each other.”6 To Webster, divine precept was the standard to judge immorality. Today, the standard is quite different, as reflected in the definition of immoral in modern dictionaries. Webster’s New World Dictionary defines immoral as “not in conformity with accepted principles of right and wrong behavior.”7 The standard for immoral behavior today has become what the consensus of the population thinks. Man, rather than God, has been declared the judge of right and wrong conduct. Man becomes his own god.

Modern textbooks have been completely sanitized of their early overtly Christian content. Many people have documented this change but none so thoroughly as Professor Paul C. Vitz in a government-funded study he conducted in the 1980s on whether bias exists in public school textbooks. His study clearly showed that bias and censorship exist and that the nature of the bias is clear: “Religion, traditional family values, and conservative political and economic positions have been reliably excluded from children’s textbooks.”8

Vitz wrote that while the bias may not be deliberate, a “secular and liberal mindset appears to be responsible.”9 And he points out that the bias is primarily manifested by exclusion. As an example, “Sixty representative social studies textbooks were carefully evaluated,” and “none of the books covering grades one through four contain one word referring to any religious activity in contemporary American life.”10

While these social studies texts mention the family, “the idea that marriage is the origin and foundation of the family is never presented. Indeed, the words marriage, wedding, husband, wife, do not occur once in these books.”11 It is not surprising why so many Americans today reject the biblical view of the family.

The social studies texts frequently presented “role models” but “not one contemporary role model is conservative and male.” High school U.S. history texts almost completely ignored major religious events of the past two hundred years and there was “constant omission of reference to the large role that religion has always played in American life.”12 This was true for elementary texts as well. In one second-grade history book, thirty pages were given to the Pilgrims, but they were “described entirely without any reference to religion.”13 At the end of the first year, they observed a day of Thanksgiving, but no mention is made of the fact that they gave thanks to God.

Christian bias via exclusion continues in current textbooks. For example, one recent history text quotes the Mayflower Compact: “We whose names are underwritten ... do by these presents solemnly and mutually in the presence of God, and one of another, covenant and combine ourselves together into a civil body politick.” What was omitted from this important historical document? Their clear Christian motive: “for the glory of God, and advancement of the Christian faith and honor of our king and country, a voyage to plant the first colonie in the Northern parts of Virginia.”14

Bias is not only expressed by exclusion but also by changing the meaning of a text or writing. One U.S. History Advanced Placement textbook summarizes the Second Amendment as, “The people have the right to keep and bear arms in a state militia,” which is an inaccurate meaning of the amendment which clearly states, “the right of the people to keep and bear arms shall not be infringed.”15 This same text says the First Amendment gives us a “separation of church and state,” failing to explain this amendment does not separate God from government or religious ideas from public life. Rather, it acknowledges a jurisdictional separation between the institution of civil government and the institution of the church.

Misrepresenting motives is another means of bias. Under the heading “Roots of American Government,” a popular seventh-grade Houghton Mifflin social studies textbook expounds, “Enlightenment thinkers in the American Colonies were excited. Here they were, the first people in history to have the chance to create an entirely new government based on Enlightenment Principles.”16

However, America was not created by Enlightenment thinkers with Enlightenment ideas but, according to John Adams, “The general principles on which the fathers achieved independence were ... the general principles of Christianity.”17 This is confirmed in a study done on the influence of Enlightenment thinkers on the political ideas of the Founding Fathers. Professor Donald Lutz conducted an exhaustive ten-year research of about 15,000 political documents of the Founders’ Era, recording every reference our Founders made to other sources. By far, the most quoted source of their political ideas was the Bible, 34% of citations, and about 50% of the other citations came from men with a biblical worldview.18

Some texts teach direct lies, such as a high school history textbook published by Pearson that teaches President Trump is mentally ill and that his supporters are racists.19 In other texts, the Founders of America are often presented as atheists, agnostics, or secularists who wanted no religious influence in public life, when, in fact, all but a couple of the signers of the Declaration and two or three members of the Constitutional Convention were orthodox Christians who believed the foundation of free nations rests on the Christian faith.20

To counter the bias in textbooks and the secularization of American education, we must provide our children with an education rooted in truth, having a philosophy, methodology, and curriculum that is Christian. Private or homeschools are the best means to do so. For those who have no option but government schools, a diligent supplemental teaching of truth should occur at home. For the good of the nation, we must also work to transform our current worldly system of education, which brings bondage, to a Christian system, which will liberate individuals and in turn the nation at large.

Five Truths for Every Donor

Ten Things Every Christian Should Know About Social Justice Ideology